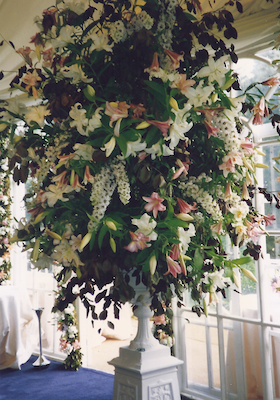 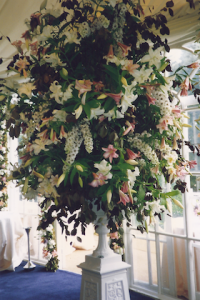 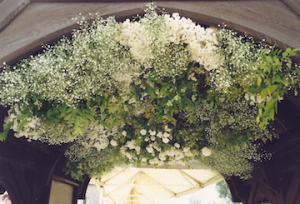 PACKER WEDDING:   Gretal Packer, only daughter of Australia’s richest man, Kerry Packer (deceased), was married in 1991 in the most expensive non-royal wedding in British history.

The ceremony was held in the 15th century St Mary’s Church in the village of Easebourne in Sussex, south-east England. It was attended by 250 guests including Rupert Murdoch and his wife Anna; former NSW Premier Neville Wran; cricketer Imran Khan; horse breeder Robert Sangster, and a host of celebrities and business associates.

A total of 1,000 guests later celebrated at a reception on the grounds of Mr Packer’s Tudor mansion, Fyning Hall, in nearby Rogate, under a series of marquees bigger than the church in which Gretel was married. It is understood the wedding cost Mr Packer $2.5million.

“There were thirty florist split into two teams.   I was in Team – Church and Cocktail Reception.     In the Church every surface was covered with floral arrangements and the Cocktail Marquee was a spectacular welcoming. The theme was soft and pretty and the Reception was a blaze of glory with a mixture of bright colour and lights. The driveway alone was laden with 250 terracotta pots, specially made in France with Tuberose perfume”.